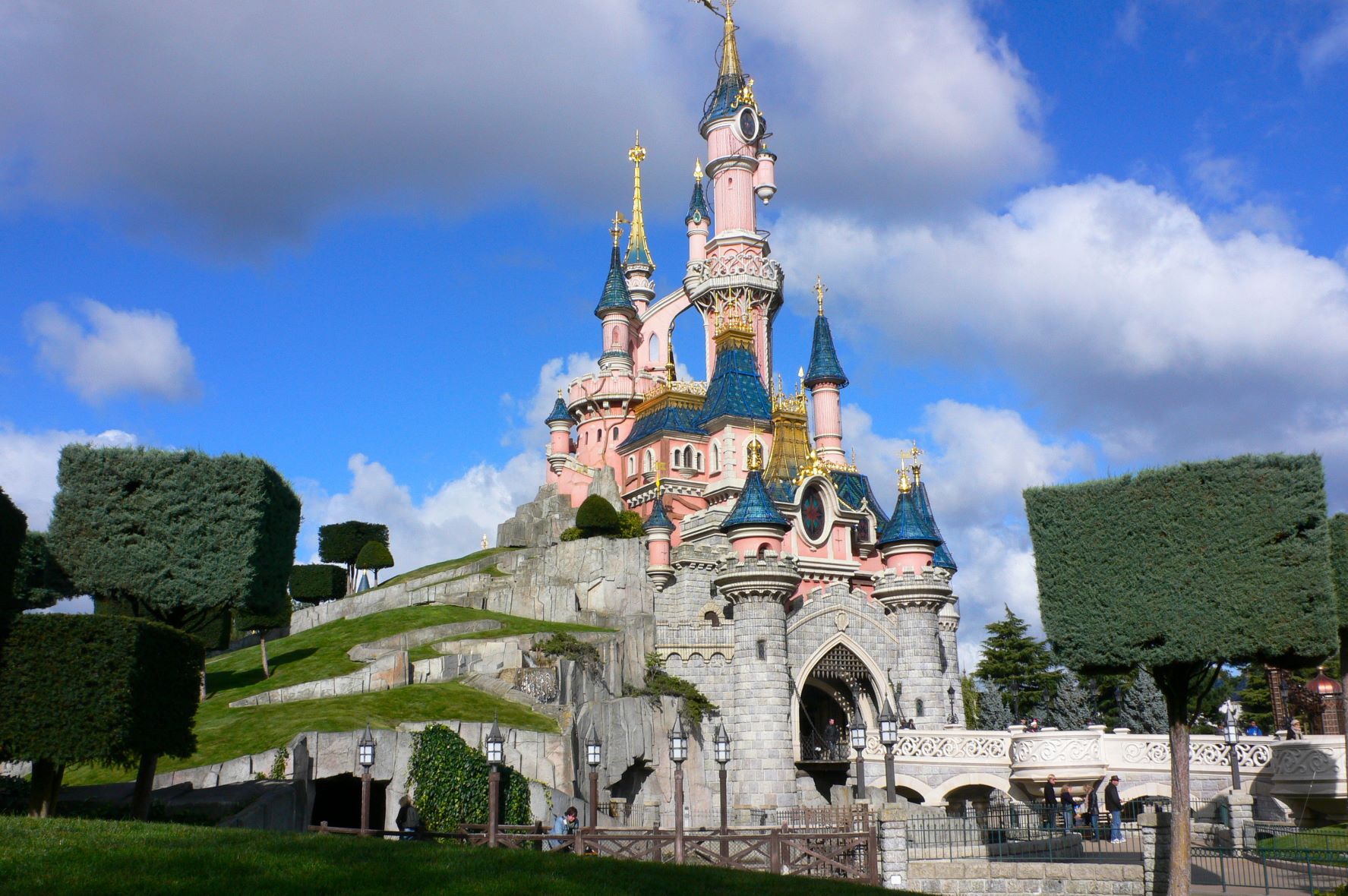 Last November I stepped foot inside Disneyland Paris for the very first time and if I’m being completely honest, I’ve thought about that trip near enough daily ever since. It wasn’t a very long holiday, just three days spent racking up thousands of steps wandering around the most magical place on Earth™. But as corny as that sounds I really did have an incredible time in that bizarre little bubble of a world at Marne-la-Vallée, located just outside Paris.

Growing up I never really had a ‘proper’ family holiday. Sure, there was the odd trip to the seaside or maybe a castle but nothing that required a stuffed suitcase and especially nothing that required flying. In fact it was as recently as 2016 I took my first flight somewhere - that somewhere being Dublin so let’s face it, not a particularly strenuous journey. That being said my next one was all the way to Toronto so I sort of made up for that I guess.

So without that stereotypical childhood trip to Disneyland I never really registered it as a place to visit as I grew older. I assumed I’d missed my window of opportunity and that the only adults who went there were either parents or those weird Disneyland fanatics who have annual season passes and track every minutia of change within the parks.

What a fool I was! The many years of enjoying theme park simulators from Theme Park World to Planet Coaster should have been a major giveaway. As too should the hours of reading Disneyland-related wiki pages learning how the parks were created. All that and yet I never really thought about travelling the three hours or so away from where I live to see it for myself. Man am I dumb sometimes. Thankfully one of the benefits of having a significant other is that you end up doing a lot more stuff as a couple. Even more thankfully, one idea of theirs was to go to Disneyland Paris and so we did. After searching for a decent Eurostar/hotel/park entry package online, we picked a late November midweek to visit in the hopes of avoiding big tourist crowds before the Christmas holidays but still seeing the park festive themed.

I won’t go into too much detail about the whole trip since I rambled for ages on a JFS Minecraft episode so if you’re curious and want to hear more, go give that a watch instead. What I wanted to do for this blog post is make a Top 5 list of my favourite rides and attractions in the park. We managed to see or ride almost everything we wanted to during our short trip and now I’ve had a fair bit of time to reflect on them.

I’ll preface this by noting that obviously we didn’t go on any of the little kiddy rides so don’t expect those. (I think if we’d done that, people would have assumed we were the Disneyland fanatics or worse, creepy guys hanging around small children without any children of our own…no thanks!) And I guess one more thing to note is that whilst all these rides and attractions I’m about to list are great fun in their own right, it’s also the bits in between that make Disneyland so special. It’s the park as a whole from the architectural mastery of hiding immersion-breaking features to the subtle landscape changes as one area blends into the next. It’s the jolly music as you walk through the central plaza and the smell of fresh popcorn in the air. The horse and carriage roaming the streets and the actors being chased by frantic children. Ok, I think you get the point - I’ll stop fawning and get on the with list. Well not quiet, let’s get some honourable mentions out of the way first - rides or attractions that I thoroughly enjoyed but that didn’t quite make the cut.

First up is Liberty Arcade and Discovery Arcade, two areas of the park situated either side of Main Street. I was very close to putting Main Street, U.S.A in this spot instead because let’s face it, that view as you initially enter the park is pretty magnificent. As the first themed land you’ll see, the rows of 1920’s shops and stores that stretch all the way up to the central plaza are chock-a-block full of detail and charm. And watching the Christmas parade frolic on through it as ‘snow’ poured out of the chimneys above was something to behold. But I wanted to single out these two streets either side of it instead, because there’s just something about them that I adored during my trip to the park.

The reason for these two arcades alongside Main Street U.S.A stems from the difference in climate compared to sunny Anaheim and Florida. Park guests would need a sheltered route through to the rest of the park in case of rain, which sadly is quite often! Practically, I loved these arcades since the line of shops down Main Street back onto them and allow you to sneak out and dodge all the crowds. But it’s their actual theming that makes them so captivating. 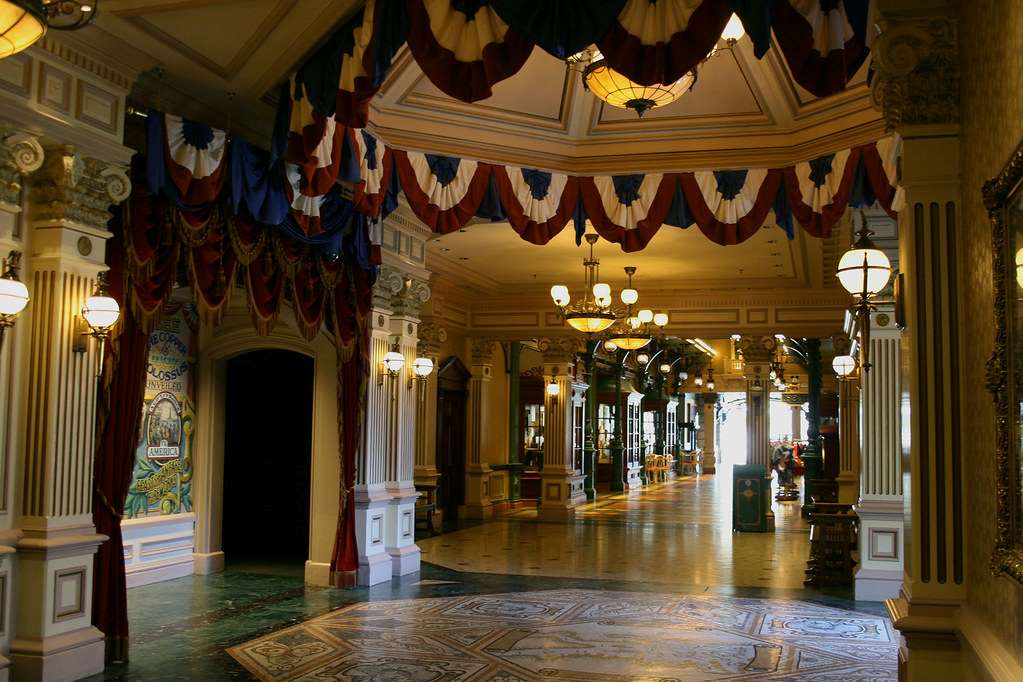 If you’ve ever played the game BioShock Infinite, you’d recognise that turn-of-the-century style and think you’ve suddenly been transported to the airborne city of Columbia. Both arcades are adorned with that neoclassical, colonial architecture and are aglow with gas lamps lining the ceilings. Liberty Arcade, as the name would suggest, focuses on the history of the Statue of Liberty, a wise choice given its American/French connection. Discovery Arcade on the other hand features inventions and discoveries during the 20th Century. Since our trip was in November, the nights were drawing in and as it grew darker it was wonderful to walk through these arcades and feel the warm glow of the gas lamps as you study the intricacies of not only the displays but also of the construction itself. Despite standing in the grossly commercialised location of Disneyland far away from home, the arcades were a bizarrely comforting place to be in.

Indiana Jones and the Temple of Peril

I had no idea Disneyland Paris featured an Indiana Jones themed roller coaster until I was sat 40m under the sea on the Eurostar deciding which rides were a must-see during our trip. Turns out Indiana Jones and the Temple of Peril has been there since 1993! I had always assumed it was Disney properties only within the park (excluding Disney Studios which has all sorts). Jump forward to today and now Disney owns Indiana Jones through its purchase of LucasFilm - funny how things work out.

As a big Indy fan, I was excited although hesitant to ride the roller coaster - I’m definitely not one of those thrill-seekers and the thought of riding the likes of some roller coasters found in Alton Towers or Thorpe Park terrifies me. Not only for the heights and drops and twists and turns but also for what it might to do my stomach and the poor person in front of me. With our app stating a queue time of 0 minutes we headed over since I decided there was no point in coming to Disneyland if I was going to wuss out on all the big rides. 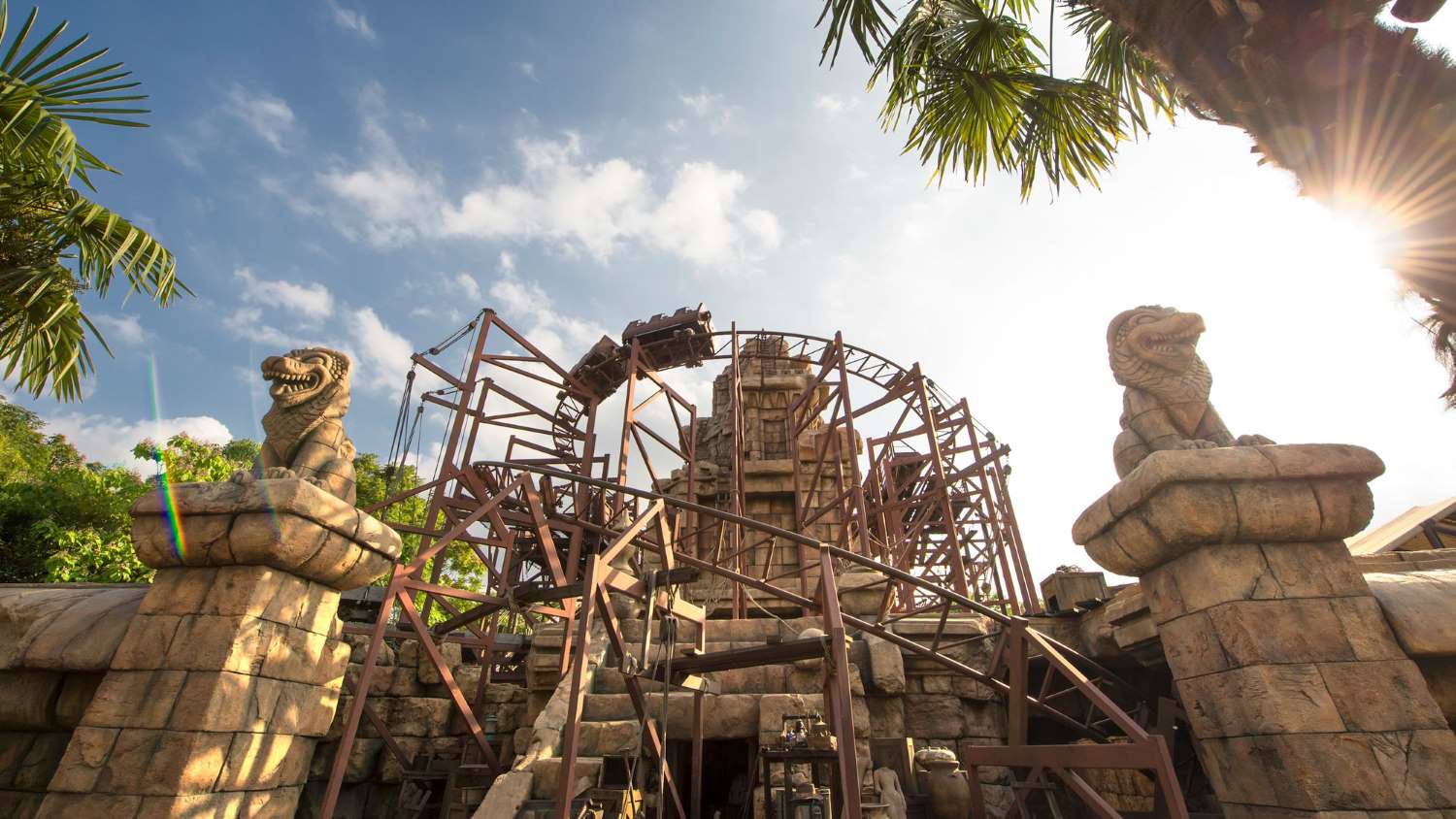 The landscaping of the queuing system is fantastic as you make your way through jungle camps and spot that signature hat and whip along the way. Eventually you climb up the ancient temple to ride the roller coaster itself and before you know it you’re strapped in and ready to go. Everything is sounding great so far, why is it only a special mention you may be asking. Let’s just say that for me, the peril of Indiana Jones and the Temple of Peril was very real. The coaster features a loop and I had no clue whether or not to keep my glasses on. I opted to wear them which as you can probably guess was a bit of a mistake. Up comes the loop and off comes my glasses…my only pair of glasses I’d brought with me on the trip. I didn’t really want to appreciate the rest of the park as a blurry mess so I grabbed the glasses as they fell off my face and held onto them for dear life as the ride continued. Thankfully it’s quite a short roller coaster but in all the commotion I missed most of the ride. So that’s why Indiana Jones and the Temple of Peril didn’t quite make the cut - sure, it taught me a good lesson in taking off my glasses for the remainder of the trip but only at the cost of a small heart-attack.

Ah, Phantom Manor - my favourite ride I…never actually went on. And for that reason it makes the special mention list since I’m pretty sure if I had, it’d be up there at the top instead. Phantom Manor, as the spooky name would suggest, is a ‘ghost ride’ similar to the Haunted Mansions found in other Disneylands. I’m a sucker for classic, cheesy spookiness and the ride’s inclusion of laughing skeletons, changing portraits and dancing ghosts is just my cup of tea.

In fact I’d appreciated Phantom Manor long before this trip but just completely forgot about it. In Episode 78 of my Minecraft FTB Let’s Play I built a haunted house and took huge inspiration from (i.e. copied) Phantom Manor, complete with spooky interactive features inside as if it were a real ride. 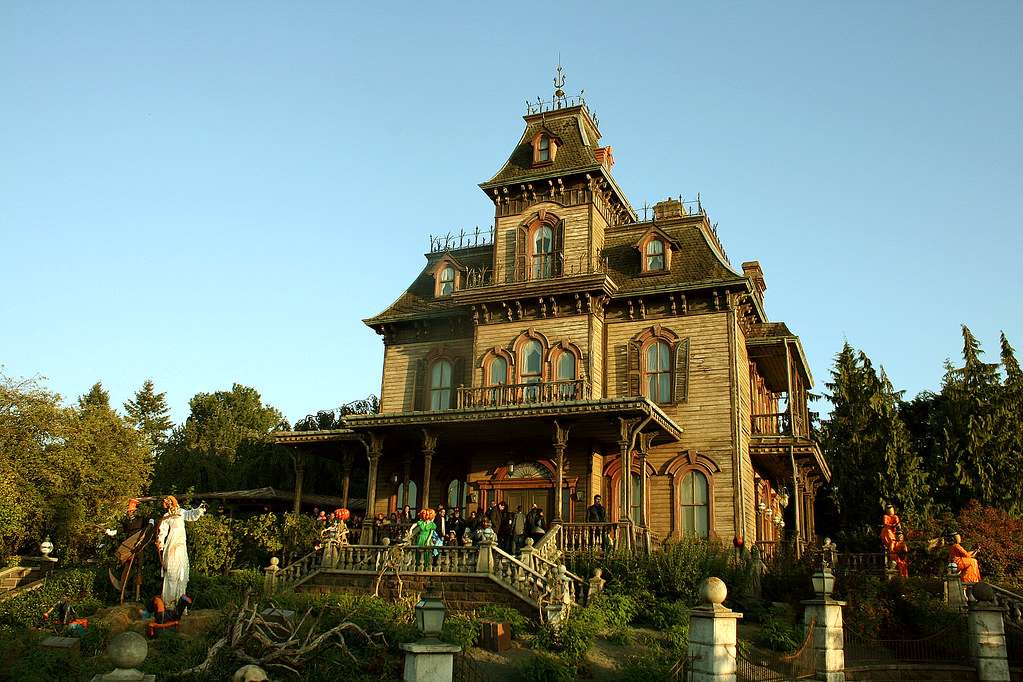 The cherry on the cake is that the narration, which told the story of Henry Ravenswood and his haunted Victorian manor, was originally voiced by none other than the wonderful Vincent Price. They really couldn’t have picked a better choice given Price’s history in the horror genre and his perfectly petrifying voice. I mean let’s face it, what would Michael Jackson’s Thriller be without Vincent Price’s blood-curdling final laugh? Sadly it was mostly replaced only a few months after the ride’s opening in 1992 with a primarily French version by Gérard Chevalier. Just as sad is the fact the ride was closed during my visit! Between Jan 2018 and April 2019, the ride was shut down for refurbishment to update special effects and give the ride some much need TLC. The good news is asof May 3rd 2019 it’s finally reopened which just means I’ll need to plan another trip to the park in the future. Better yet, with this refurbishment they’ve restored the original Vincent Price narration so I’ll finally be able to appreciate his villainous voice as I make my way into the depths of the manor.

Blimey I know I can ramble but I didn’t imagine writing 1700+ words on just the introduction and special mentions! In order to stop this becoming more of a novella rather than a blog post, I’ll end it here. In the next part I’ll address my actual top 5 rides and attractions but considering how long it takes me to write, I’d probably have visited the park again by then…