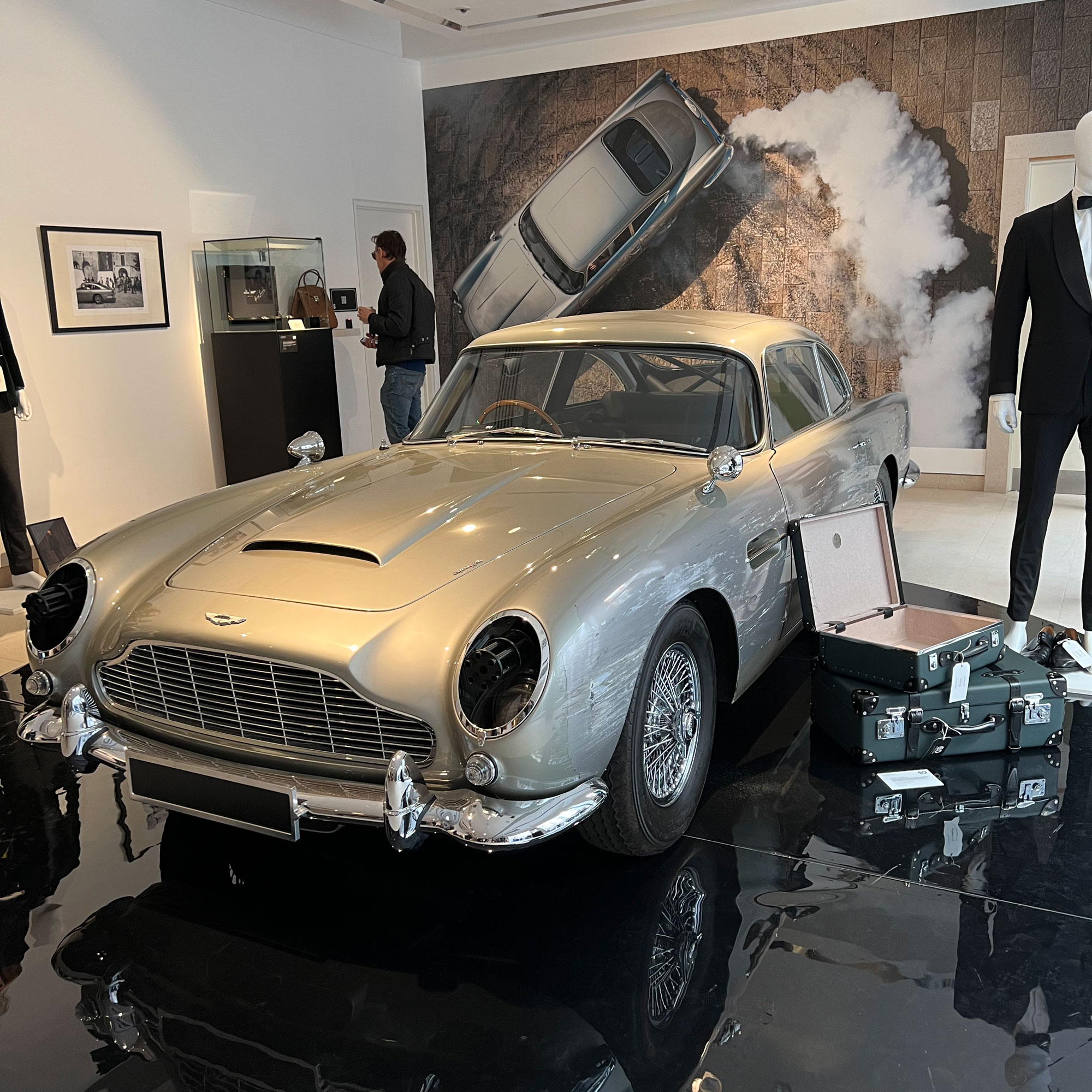 Surprises are great aren’t they? Well, except the bad ones like unexpected bills, health concerns or global pandemics. But sometimes they can be nice. And I had a nice one last weekend when my partner and I visited London for a day out.

It was one of those trips with no real plan in mind, we were basically just winging it. I had a rough idea of wanting to have a stroll down The Mall and around Buckingham Palace, having seen that area plastered across our airwaves for the Queen’s funeral the week before. I suppose I should say this was to pay my respects towards my old roommate, Her Majesty, but the truth is less patriotic. I’ve recently picked back up playing Watch Dogs: Legion, which I’d started playing a while back but stopped. For curiosity’s sake I tried following the path the Queen’s funeral procession took in-game and wondered how accurate the area was to its real-life counterpart. Hmm, I think that still counts as paying respect - I’m sure it’s what she would have wanted.

All of that is a long way to say that we travelled to Piccadilly Circus tube station with the intent of walking across to The Mall, down to Buckingham Palace and then along to Wellington Arch. A quick stop at Caffè Nero and off we set along Jermyn Street and down Duke Street, St James. Except I had barely had enough time to sip the foam off my flat white before a certain shiny car in a window caught my eye. If there had been a recording of me it would’ve been close to a Patrick Stewart quadruple take.

But there was no doubt, that was the Aston Martin DB5 alright. Looking decidedly less blocky than when I had last seen it. A closer look and I started seeing a tuxedo, a briefcase and most exciting of all - an egg (you’ll see). This was definitely something James Bond related but what on earth was it? A turn of the corner and all was revealed - it was Christie’s, one of the most famous auction houses in the world! And then I suddenly remembered reading that yes, Christie’s was doing some sort of charity auction celebrating sixty years of 007. Better yet, a selection of items were open to the public to view in their London galleries and we’d somehow just waltzed right up to them by coincidence.

I downed my coffee and sheepishly looked at the front door, worried they’d usher me out like Homer trying to find a new bar.

Then I noticed a family entering with smelly noisy children and my doubts were extinguished, everything was fine…apart from the smelly noisy children. The corridor to the Bond items was lined with humongous vintage posters of the films that would’ve looked smashing on the walls next to my granny curtains. The gallery itself wasn’t huge by any means but they had an interesting assortment of items which you can see on their website. I didn’t take many photos since it got pretty crowded at times but I was just so giddy at being able to see some of this stuff up close and personal.

The star of the show was of course the DB5 front and centre, which was just a smidge out of my budget unfortunately. I’m writing this just as the auction finishes in fact, so I can confirm this puppy set someone back £2,922,000. But hey, it’s for charity so good on them.

There were of course some other classic Bond-esque lots like a tuxedo worn by Daniel Craig, or special edition Omega Seamaster but it’s the weirder, less obvious items that interested me more.

For example the cello case sled used in The Living Daylights. What an actual piece of 007 history as Bond and Kara make their escape with it in Austria. 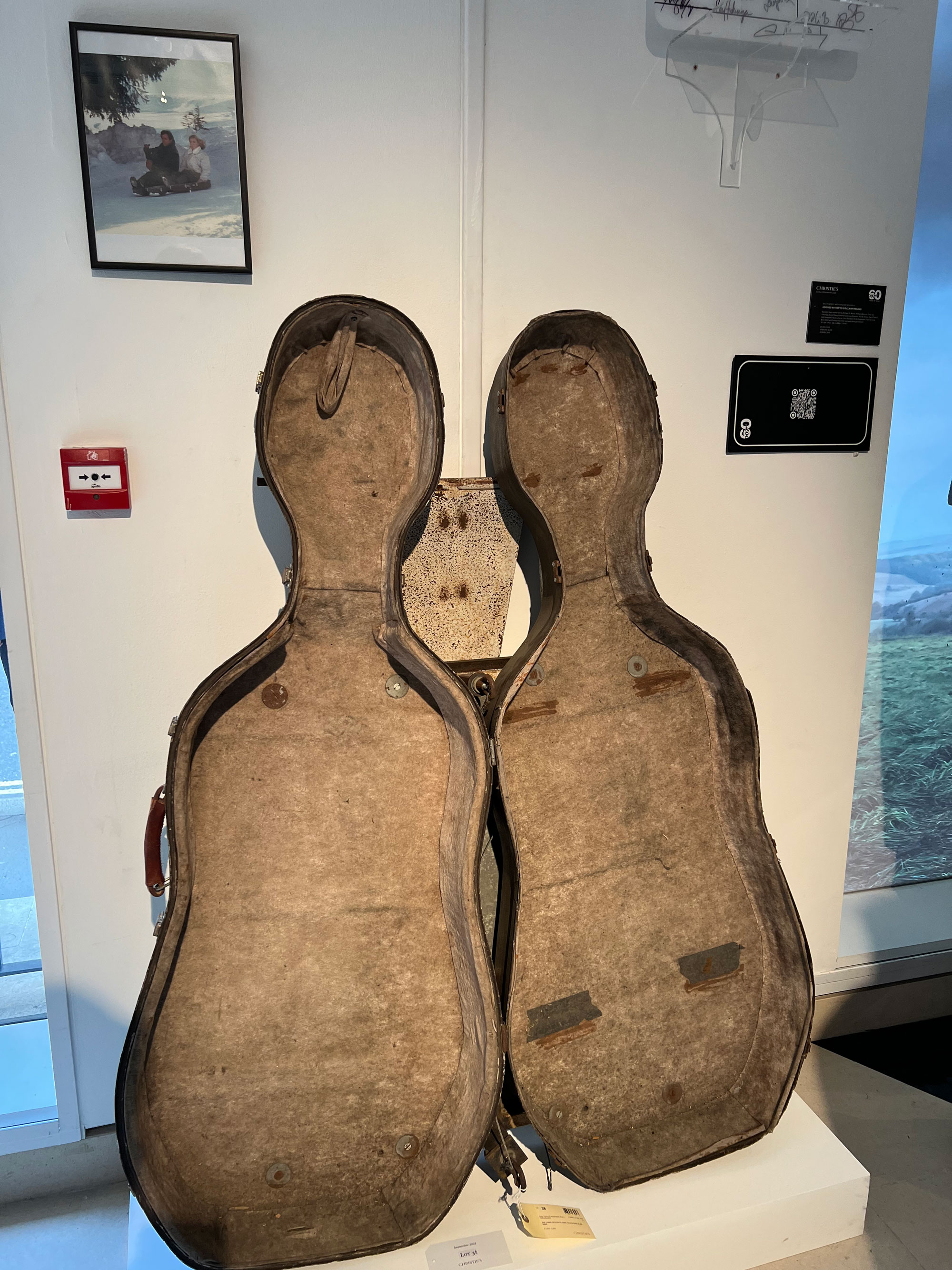 Or the alarm clock cunningly used by M in The World is Not Enough whilst kidnapped by Renard. I love how it’s such a random, seemingly boring item to anyone but a Bond fan. 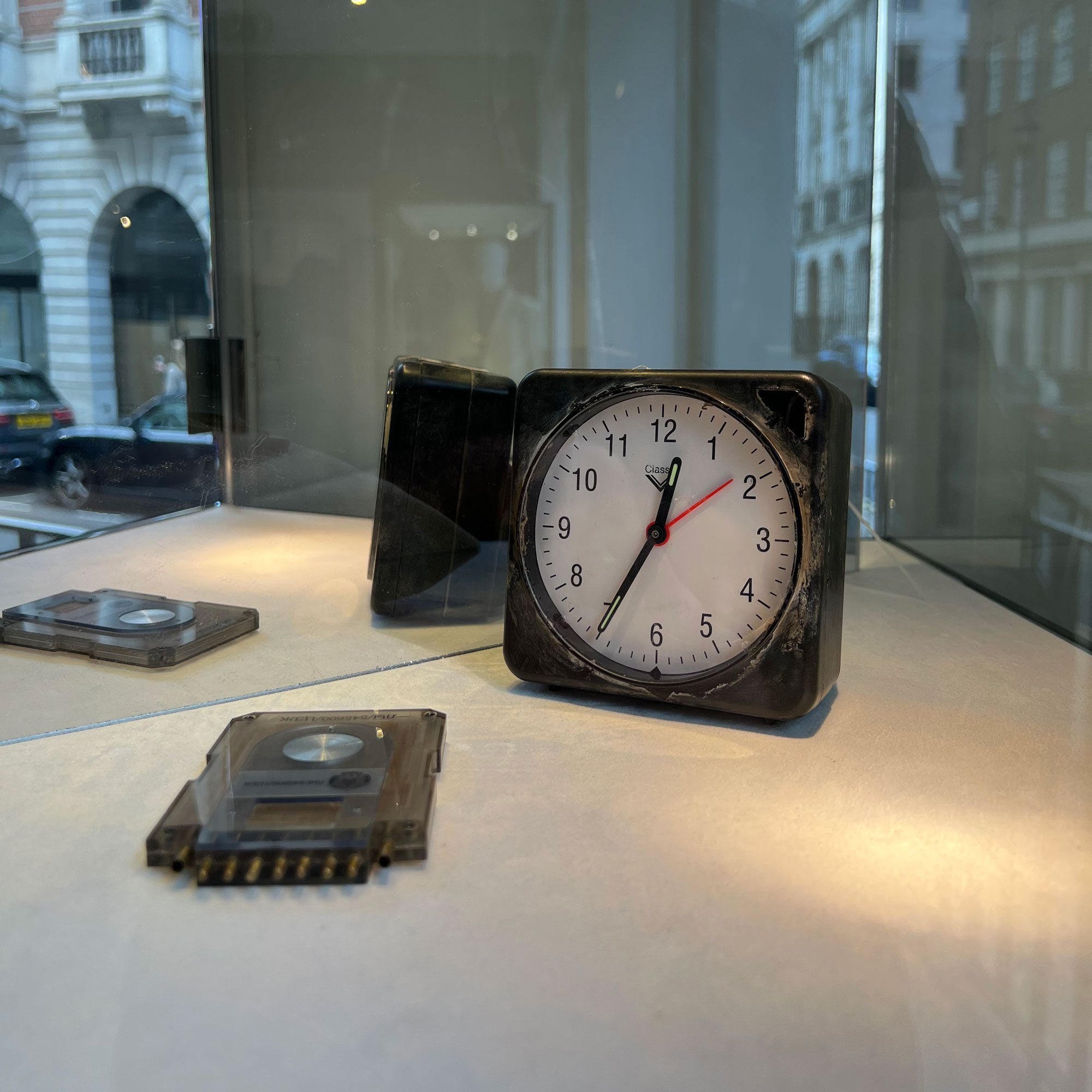 But perhaps my favourite of them all was a lot related to good ol’ Sir Rog himself - The ‘Imperial Easter Egg’ prop from Octopussy. 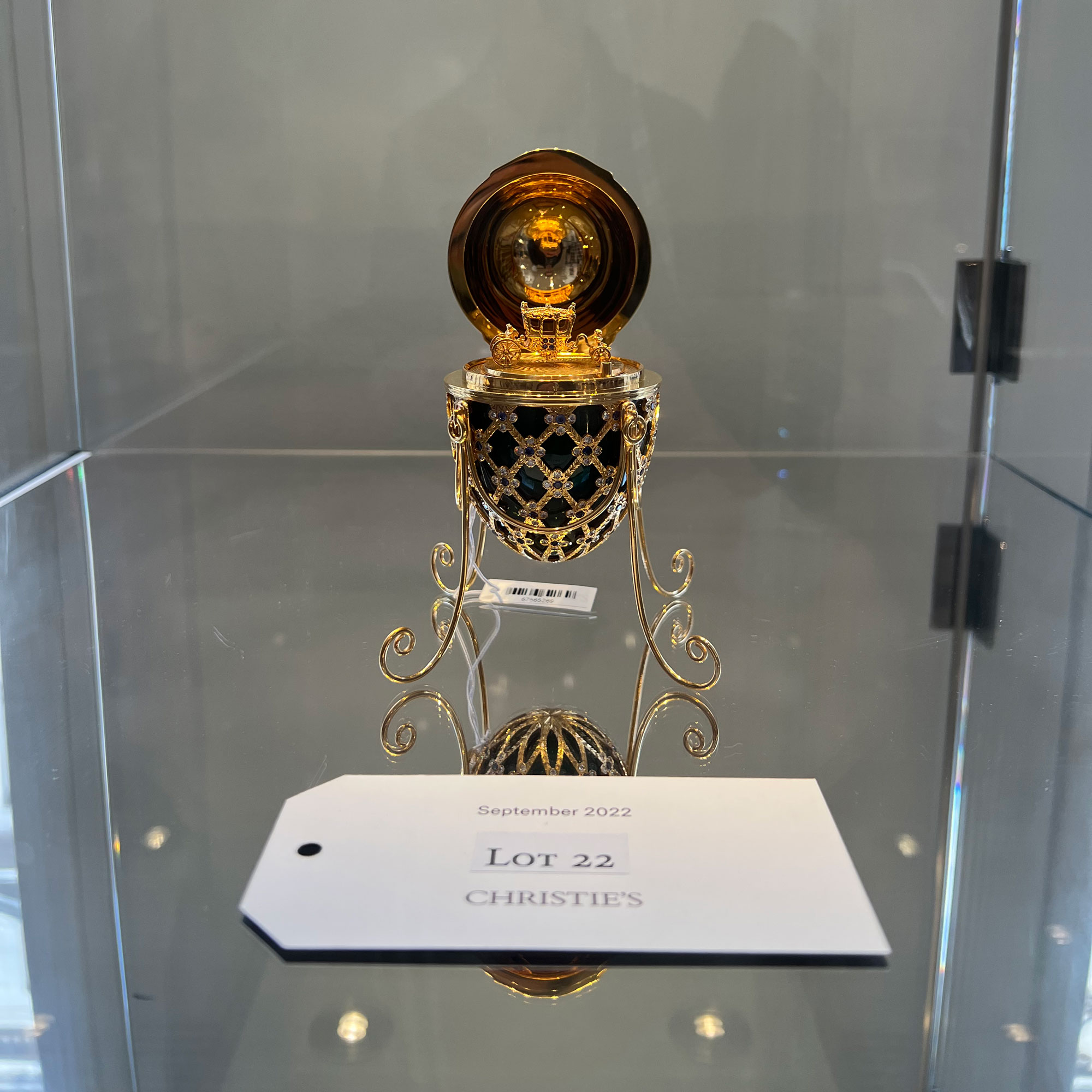 Though Fabergé eggs aren’t really my cup of tea, I loved this little thing sparkling away in the corner. That being said I can’t for the life of me remember its role in the plot of the film. Never mind though because the thing is apparently worth a hefty £327,600 to somebody at least. A cracking result to be sure.

There were tons of other items too, ranging from No Time to Die’s bionic eye to production clapperboards. On the topic of No Time to Die, Bond’s final outfit looked to be in remarkably good condition despite being blasted by a barrage of missiles. 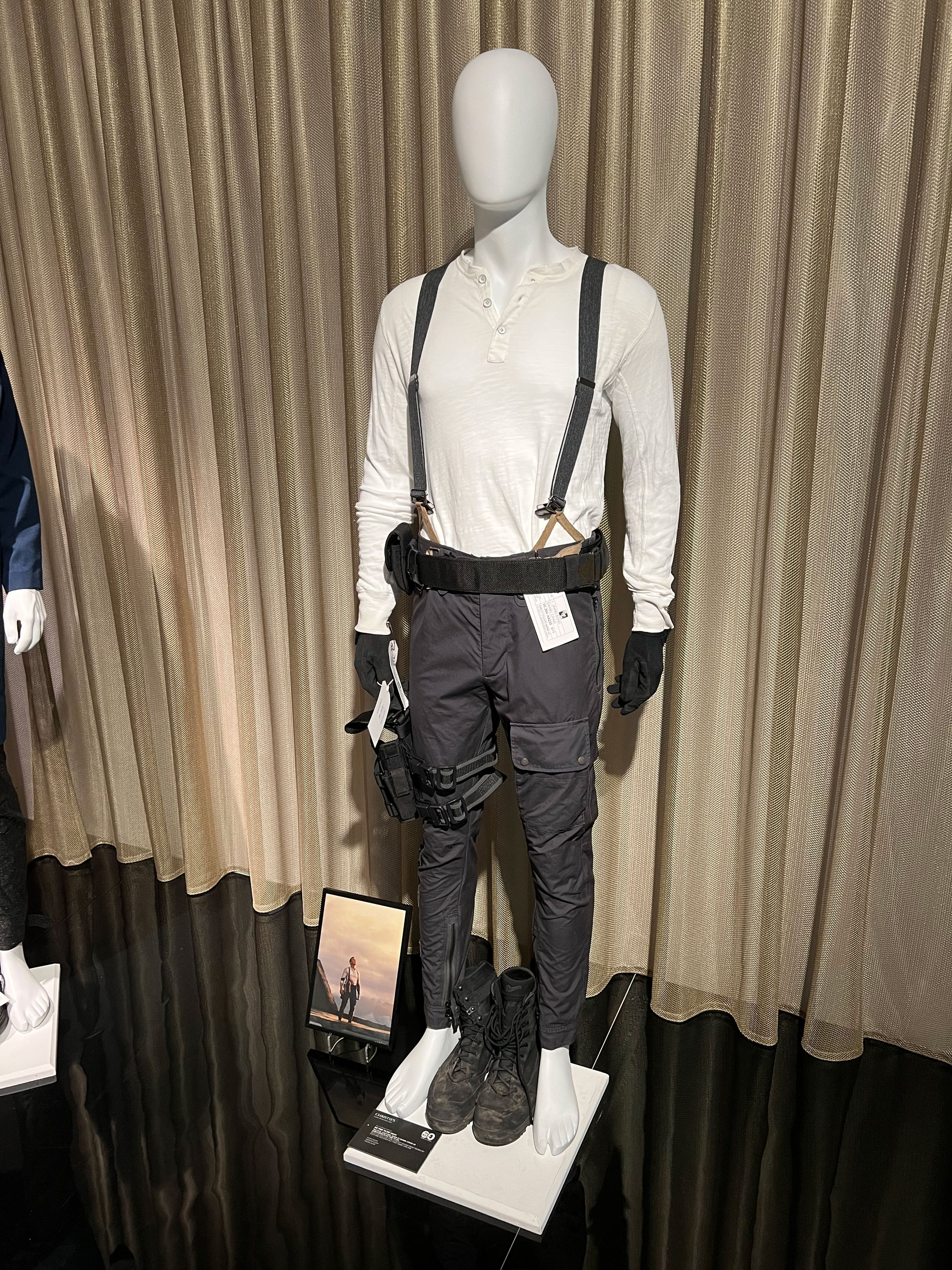 To think, if we’d just taken the next road instead we’d have missed all of this! But that wasn’t the only event to warrant this being a whole day of accidental Bond-ness, no no. Though I’ll admit, the rest isn’t quite as good.

After our procession-based walk had come to end, we were at Wellington Arch without much of a plan. And when there’s no plan that means only one thing - pub. Being in central London there was no shortage of those, and a quick Google search showed the Rose & Crown being just five minutes away along Piccadilly. As we walked up to it near Old Park Lane, we stopped to gawk at the massive queue forming for a Hard Rock Cafe. All the amazing places to find food in London and they’re here queuing for that. But just like my lightbulb moment remembering the Christie’s auction, I had another one that second about something else Bond related.

A few days earlier I had been reading a Variety news article titled James Bond Producers Search for a New 007 Who Will Commit for a Decade: ‘Bond Is Evolving as Men Are Evolving’. Quite the mouthful, but the article itself was interesting enough. It was of course an interview with Barbara Broccoli and Michael G. Wilson, outlining some of their plans for deciding who will pick up the mantle next. Though they were very light on actual details, the section that stood out to me while reading was this:

“The producers are seated at a roundtable in their spacious office at Eon House, the headquarters of their production banner Eon Productions — a stately, towering Edwardian home on London’s Piccadilly, overlooking Green Park and nearby Buckingham Palace.”

Hang on a moment - London Piccadilly…overlooking Green Park…nearby Buckingham Palace. That place sounds like where I’m at. I’m a guy like me! I wondered if it was close and only had to turn around to spot this: 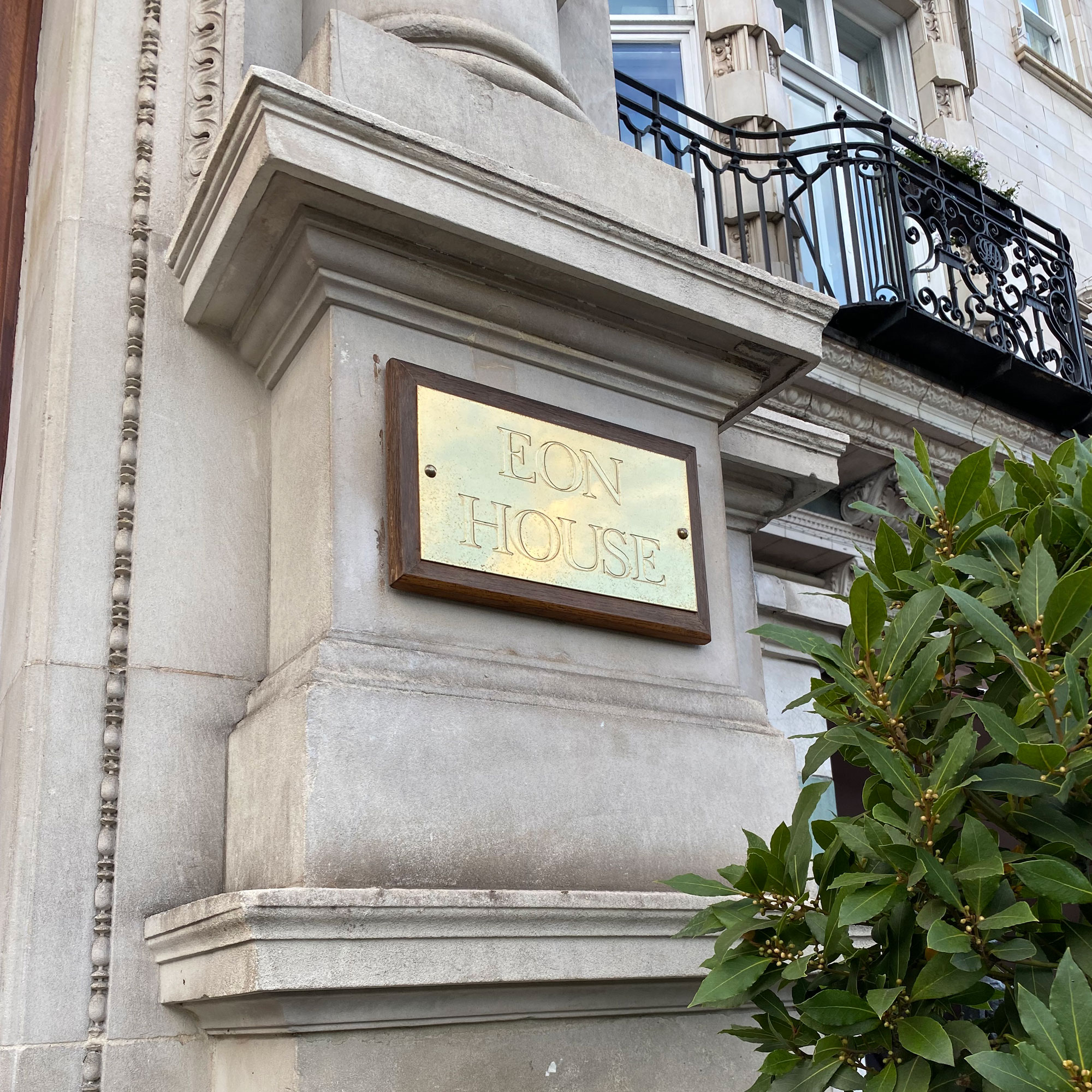 Nothing too crazy obviously - it’s not like I could barge in, see this big roundtable for myself and start chatting to Barbara Broccoli about why she has such a funny name. But after the earlier Christie’s happenstance, it was as though destiny was in my favour, the stars had aligned and today was a Bond day - a good day. The pint in the Rose & Crown helped too, as did the big group of entertaining American tourists that sat next to us. Americans in London are really funny. Mind you, I suppose they’d say the same about us visiting them across the pond.

Oh there was one more ever-so-slightly Bond thing that happened that day. But only barely. At one point we walked through Burlington Arcade which, for some reason, had been all dressed up for No Time to Die’s release back in September last year. It looked decidedly less Bond-y when we visited though.

But overall, for being a completely unplanned trip I had a great day. And better yet, coming up very soon is an intentional 007 day to see the ‘The Sound of 007 in Concert’ at the Royal Albert Hall. Consider me one very happy Bond fan.